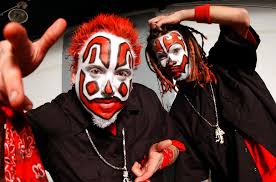 I have blogged previously on  the Darkside of Clowns,  The Trickster / Heyoka  "Sacred Clown"  and the Circus.

Until now I have  never commented on the Insane Clown Posse , I knew they were from Detroit and contemporaries of Eminem but until today hadn't been aware of the Kid Rock  connection also a contemporary and also a white rapper.

Kid Rock started out  as a B Boy as well as a DJ and M.C.  Breaking Dancing reminds me of the lesser known Hip Hop dances of Clowning & Krumping.

All three I.C.P. , EMINEM and Kid Rock  have built their careers on the foundations of Black Music. At times they may have struggled with elements of their white fan base that haven't always shared  their anti racist values.This reminds of the infiltration of racist skinheads in two tone ska scene in the UK in the eighties.

Indeed "The Juggalos" known for their party lifestyle were even unfairly compared to supporters of Donald Trump who have shown far less committment to inclusive values.

In my mind this is because Trump clearly crossed the line and allied himself with the Evil of the Joker rather than the flawed but ultimately just cause of the Dark Knight. 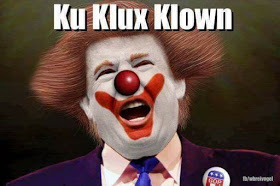